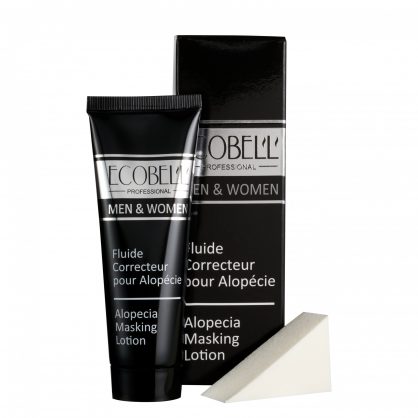 This lotion takes over from where Couvre left off, sadly Couvre is no more and those of you who used it know how good a product it was. Like you we also wish it was still around as it was one of our constant sellers. Also sometimes things change and we have to move on.

Ecobell Scalp Concealing Couvre Alternative Lotion has become the alternative to Couvre as far as we and our customers are aware. We here at hairlossireland had to find an alternative because the outcry of the end of Courve was so strong.

Keep in mind this is NOT Couvre so it will have it’s slight differences, but think back to when you first started using any hair product it took you a while to get used to it and the same would go for the Ecobell Scalp Concealing Couvre Alternative Lotion.

First thing customers have told us is that it’s not as thick a concealer as Couvre was, and our advice is then to apply less if it’s thinner in texture and build it up, what that means is don’t just put a lot of it on until you get used to the difference in thickness and you can find your comfortable amount, in order for it to do it’s job.

Ecobell Scalp Concealing Couvre Alternative Lotion has proved very popular indeed since we started selling it and the demand seems to be growing despite it being only an alternative to Couvre and not actually Couvre.

Like Couvre you apply it just the same directions below…
1. Comb dry or damp hair away from thinning area.

3. Dab onto scalp, blending into surrounding hair for a natural look.

We use cookies on our website to give you the most relevant experience by remembering your preferences and repeat visits. By clicking “Accept”, you consent to the use of ALL the cookies.
Cookie settingsACCEPT
Manage consent

This website uses cookies to improve your experience while you navigate through the website. Out of these, the cookies that are categorized as necessary are stored on your browser as they are essential for the working of basic functionalities of the website. We also use third-party cookies that help us analyze and understand how you use this website. These cookies will be stored in your browser only with your consent. You also have the option to opt-out of these cookies. But opting out of some of these cookies may affect your browsing experience.
Necessary Always Enabled
Necessary cookies are absolutely essential for the website to function properly. This category only includes cookies that ensures basic functionalities and security features of the website. These cookies do not store any personal information.
Non-necessary
Any cookies that may not be particularly necessary for the website to function and is used specifically to collect user personal data via analytics, ads, other embedded contents are termed as non-necessary cookies. It is mandatory to procure user consent prior to running these cookies on your website.
SAVE & ACCEPT